Street signs can be found in almost every nook and cranny of New York. Yet we over look them or in some cases avoid walking into them on the busy city streets. ⇔

We encounter street signs at intersections and they are generally mounted on to utility poles. However this was not the case in America, before the 1900’s street signs were mounted into the corners of buildings or chiseled into the masonry. Some of these old style signs still exist in older parts of the city but are slowly becoming extinct in this part of the world.
Street signs in the United States are commonly green with white letters. Each state has its own versions of road sign color schemes, and has the ability to change the font of their signs. In 2013 New York City’s Department of Transportation changed their street sign font from Highway Gothic font to Clearview. Clearview has been found to be significantly better in both day and night time legibility and has been tested to reduce overglow. Have you noticed the difference? 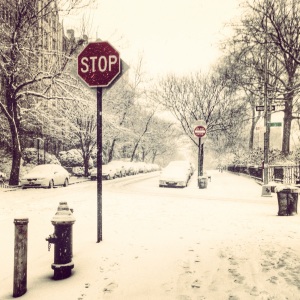